Light bulb moment.. image of a gopher peeking up .. EMOTIONAL SOBRIETY?  WHAT is THAT???  There’s more to this sober gig than NOT drinking/using no matter what?  Huh?  Just when the fuzzy adled brain starts to “get it” this emotional baggage is piling up like a mountain of easy excuses to abandon sobriety.  I’m not big on bible quotes.. but this one hit a nerve:  “Be sober minded. Be watchful.” (I Peter 5: 8)

I have lapsed and relapsed several times over my years in recovery.  I clearly recall making a conscious decision to drink to numb the overwhelming flood gate of emotions.  Lots of folks go numb .. and when emotions come back, may be overwhelmed or overloaded.. which can trigger a nasty relapse.

Bill Wilson wrote that emotional sobriety just might be the next frontier for 12 steps.  He wrote a letter to Grapevine, the magazine for AA.  He talked about his own struggles with emotions and hoped that AA would continue to evolve this concept.  Here is the letter:

People who are physically sober but not emotionally sober are often referred to as “dry drunks.” Dry drunks may not be drinking or using, but they are still exhibiting destructive behavior and are unable to handle their emotions in a healthy way. There are so many “dry drunks” out there for a reason; emotional sobriety isn’t as simple or as “easy” to accomplish as it is to abstain from drugs or alcohol. Physical sobriety is concrete and tangible, while emotional sobriety is abstract.

What are the Signs of Emotional Sobriety? • Ability to maintain a perspective on life circumstances.

• Ability to live in the present

• Resilience, the ability to roll with the punches

Emotional sobriety means something a little different to every person in recovery, however, it generally comes down to maintaining a healthy emotional balance. It means accepting reality as it is today, in the moment, and not dwelling on past regrets or future wishes. Achieving this involves learning how to leverage proper mechanisms to deal with emotions in a healthy way.

If you achieve physical sobriety but never work on taking control of your emotions, it is likely that you will relapse. Coming to terms with the fact that addiction recovery is a lifelong process can help put things in perspective. Although there may be a step backward now and then, stick to the goal of living in the present and being in control of your emotions. Give yourself permission to experience all of your feelings

“My emotions seem to rule me rather than me ruling them. I’m practicing trying to keep things in perspective, but that’s easier said than done.”

Emotional reactivity. Rollercoaster emotions. Getting bent out of shape by things we have little control over. These are all symptoms of emotional imbalance and the need for emotional sobriety. What are some ideas that can help us with our emotions?

First, learn about your emotions. Emotions are e-motions, “energy in motion,” and as such can be used for constructive purposes or be boundless energy that is quite destructive. First you must be aware of your emotional makeup. Do you become easily irritated? Are you prone to discouragement? Do you have patterns of emotional reacting that are harmful to you and your relationships? You must become familiar with these patterns before you can change them.

Second, monitor your emotions. Because most of us tend to be reactive, we seldom watch our emotional reactions. We’re caught up in whatever is taking place externally, failing to monitor/ keep watch over our emotions. Journaling is one of the best methods I know to keep track not only of our daily moods and emotions, but patterns and trends in our emotional makeup. 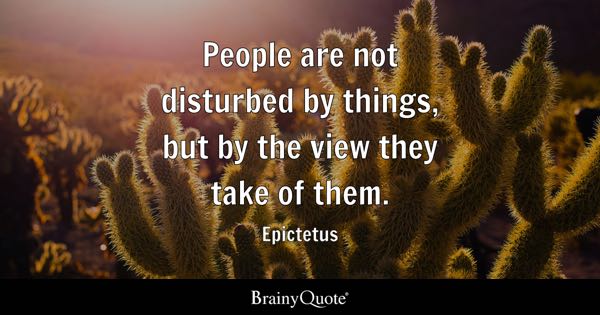 Third, embrace emotional sobriety. Take responsibility in not allowing your emotions to rule your reactions. I’ve noted that it takes far less time to feel than it does to think, but it is critical we consider every situation, using our rational thoughts to control our behavior. If you’ve had problems with anger or emotional volatility, vigorously pursue emotional balance.

Fourth, make amends quickly for emotionally reactivity. Making quick apologies for any emotional reactivity will assist you not only in taking responsibility for it, but recognizing the impact emotional reactivity has on those around you. Your apology will also make necessary repairs for damage you’ve caused.

Finally, slow things down, at work, in your relationships, and in every aspect of your life. Give yourself every opportunity to keep things in perspective by taking time to think about what you want to say and how you want to act. Don’t allow yourself to become emotionally reactive.

Many folks find that mindfullness plays a huge part in Emotional Sobriety.  See my article on my own adventures with this concept here:

Coping mechanisms can include something done silently and internally like counting to ten or breathing exercises. They can also include calling a friend or sponsor, exercise, going to 12-step program meetings, or even something like watching TV or playing video games until the anger or other negative emotions subside.

What Emotional Sobriety Means ~…”There’s a lot of introspection and self awareness that must be done to prevent us from returning to the desolate lives we once knew. It’s almost like a form of rebirth. We start discovering ourselves again upon getting clean. We relearn what makes our inner clocks upstairs tick. This process seems to be going swimmingly once we detoxify from all the garbage in our systems. Then it hits like a brick wall. “

This article is very in depth and touches on what are positive and negative aspect of Emotional Sobriety.  Topics include the Limbic System, PTSD, and Addiction and Trauma.

Emotional Sobriety: Keeping Your Emotions Stable in Recovery May 10, 2013 by Tim Stoddart

What Is Emotional Sobriety And Why Does It Matter?  By Kelly Fitzgerald 03/11/16

Accept reality as it is today at this moment, not how you wish it could be. Emotions contribute to your sobriety and your overall quality of life.

What Is Emotional Sobriety?  Hint: It doesn’t necessarily equal “happy, joyous, and free.”