The joke in a lot of recovery programs is slogans or alphabet city!  This page is gonna shed some light on some of the abcdefgh…. of it…maybe with a little fun hidden! ACT, CBT, DBT, REBT

Developed within a coherent theoretical and philosophical framework, Acceptance and Commitment Therapy (ACT) is a unique empirically based psychological intervention that uses acceptance and mindfulness strategies, together with commitment and behavior change strategies, to increase psychological flexibility. Psychological flexibility means contacting the present moment fully as a conscious human being, and based on what the situation affords, changing or persisting in behavior in the service of chosen values.

Based on Relational Frame Theory, ACT illuminates the ways that language entangles clients into futile attempts to wage war against their own inner lives. Through metaphor, paradox, and experiential exercises clients learn how to make healthy contact with thoughts, feelings, memories, and physical sensations that have been feared and avoided. Clients gain the skills to recontextualize and accept these private events, develop greater clarity about personal values, and commit to needed behavior change.

CBT) is a psychosocial intervention[1][2] that is the most widely used evidence-based practice for treating mental disorders.[3] Guided by empirical research, CBT focuses on the development of personal coping strategies that target solving current problems and changing unhelpful patterns in cognitions (e.g. thoughts, beliefs, and attitudes), behaviors, and emotional regulation.[2][4] It was originally designed to treat depression, and is now used for a number of mental health conditions.[5][6]

The CBT model is based on a combination of the basic principles from behavioral and cognitive psychology.[2] It is different from historical approaches to psychotherapy, such as the psychoanalytic approach where the therapist looks for the unconscious meaning behind behaviors and then formulates a diagnosis. Instead, CBT is “problem-focused” and “action-oriented”, meaning it is used to treat specific problems related to a diagnosed mental disorder and the therapist’s role is to assist the client in finding and practising effective strategies to address the identified goals and decrease symptoms of the disorder.[7] CBT is based on the belief that thought distortions and maladaptive behaviors play a role in the development and maintenance of psychological disorders,[3] and that symptoms and associated distress can be reduced by teaching new information-processing skills and coping mechanisms.[1][7][8]

Dialectical behavior therapy (DBT) is a therapy designed to help people suffering from mood disorders as well as those who need to change patterns of behavior that are not helpful, such as self-harm, suicidal ideation, and substance abuse.[1] This approach works towards helping people increase their emotional and cognitive regulation by learning about the triggers that lead to reactive states and helping to assess which coping skills to apply in the sequence of events, thoughts, feelings, and behaviors to help avoid undesired reactions. DBT assumes that people are doing their best but lack the skills needed to succeed, or are influenced by positive reinforcement or negative reinforcement that interferes with their ability to function appropriately.

DBT is a modified form of cognitive behavioral therapy (CBT), that was developed in late 1980s by Marsha M. Linehan,[2] a psychology researcher at the University of Washington, to treat people with borderline personality disorder (BPD) and chronically suicidal individuals. Research on its effectiveness in treating other conditions has been fruitful;[3] DBT is now used in a variety of psychological treatments including treatment for traumatic brain injuries (TBI), eating disorders, and mood disorders.[4][5] Research indicates that DBT might have some effect on patients who present varied symptoms and behaviors associated with spectrum mood disorders, including self-injury.[6] Recent work also suggests its effectiveness with sexual abuse survivors[7] and chemical dependency.[8] 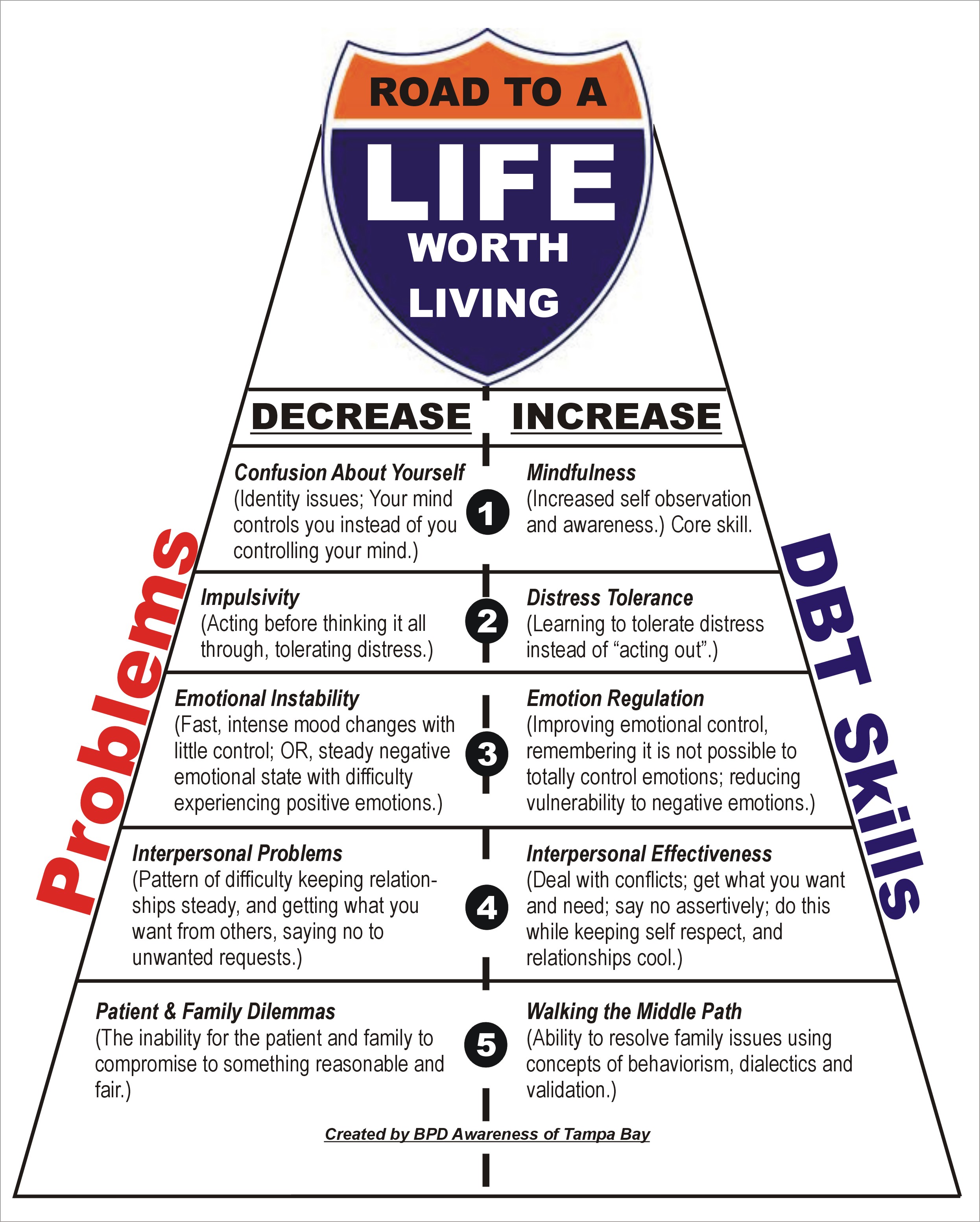 Rational emotive behavior therapy (REBT), previously called rational therapy and rational emotive therapy, is a comprehensive, active-directive, philosophically and empirically based psychotherapy which focuses on resolving emotional and behavioral problems and disturbances and enabling people to lead happier and more fulfilling lives.[1] REBT was created and developed by the American psychotherapist and psychologist Albert Ellis who was inspired by many of the teachings of Asian, Greek, Roman and modern philosophers.[2][3] REBT is one form of cognitive behavior therapy (CBT) and was first expounded by Ellis in the mid-1950s; development continued until his death in 2007.[4][5][6]

A fundamental premise of REBT is humans do not get emotionally disturbed by unfortunate circumstances, but by how they construct their views of these circumstances through their language, evaluative beliefs, meanings and philosophies about the world, themselves and others.[11] This concept has been attributed as far back as the Roman philosopher Epictetus, who is often cited as utilizing similar ideas in antiquity.[12] In REBT, clients usually learn and begin to apply this premise by learning the A-B-C–D-E-F model of psychological disturbance and change. The A-B-C model states that it is not an A, adversity (or activating event) that cause disturbed and dysfunctional emotional and behavioral Cs, consequences, but also what people B, irrationally believe about the A, adversity. A, adversity can be an external situation, or a thought, a feeling or other kind of internal event, and it can refer to an event in the past, present, or future.[13]

Albert Ellis has suggested three core beliefs or philosophies that humans tend to disturb themselves through:[16]

REBT commonly posits that at the core of irrational beliefs there often are explicit or implicit rigid demands and commands, and that extreme derivatives like awfulizing, frustration intolerance, people deprecation and over-generalizations are accompanied by these.[13] According to REBT the core dysfunctional philosophies in a person’s evaluative emotional and behavioral belief system, are also very likely to contribute to unrealistic, arbitrary and crooked inferences and distortions in thinking. REBT therefore first teaches that when people in an insensible and devout way overuse absolutistic, dogmatic and rigid “shoulds”, “musts”, and “oughts”, they tend to disturb and upset themselves.

Further REBT generally posits that disturbed evaluations to a large degree occur through over-generalization, wherein people exaggerate and globalize events or traits, usually unwanted events or traits or behavior, out of context, while almost always ignoring the positive events or traits or behaviors. For example, awfulizing is partly mental magnification of the importance of an unwanted situation to a catastrophe or horror, elevating the rating of something from bad to worse than it should be, to beyond totally bad, worse than bad to the intolerable and to a “holocaust“. The same exaggeration and overgeneralizing occurs with human rating, wherein humans come to be arbitrarily and axiomaticallydefined by their perceived flaws or misdeeds. Frustration intolerance then occurs when a person perceives something to be too difficult, painful or tedious, and by doing so exaggerates these qualities beyond one’s ability to cope with them.

Essential to REBT theory is also the concept of secondary disturbances which people sometimes construct on top of their primary disturbance. As Ellis emphasizes:[16]