“Greater love hath no man than this, that a man lay down his life for his friends.”
John 15:13 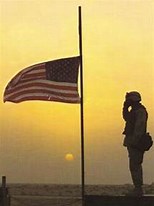 Memorial Day…  is a federal holiday in the United States for remembering the people who died while serving in the country’s armed forces. The holiday is currently observed every year on the last Monday of May. It marks the unofficial start of the summer vacation season, while Labor Day marks its unofficial end.

United States Flag Etiquette: on Memorial Day the flag should be displayed at half-staff until noon only, then raised to the top of the staff.

This tradition has been observed since the Civil War where we take one day out of the year and pause to remember all those that have served this nation in uniform and have given their life in doing so.

Does it still matter though?

Sometimes it seems that Americans associate Memorial Day more with the “kickoff” of summer, barbecues, and ads for furniture sales rather than taking this day to remember that we have a long list of people who gave the ultimate sacrifice to allow us the freedoms to enjoy all those things and more.

The Veterans Affairs Department reports that of all the wars America has been in, we have lost 700,000 soldiers to battle deaths ( in theater ) and just over 300,000 deaths listed as “other deaths” (in theater ). That is approximately one million people who have died fighting or in combat zones for this country and its ideals. Living to be free from tyranny and to continue the pursuit of happiness spoken of in our Declaration Of Independence.

The men and women who served with those who have died, carry their memory home with them. Memorial Day for them and the families of those who have died is not just the last Monday in May but every day. That the nation takes a moment out of its calendar to remember those that passed matters to them.

I hope it still matters to the majority of this country and we all take more than just a moment to say a prayer but really think about the sacrifice of giving up your life so others can live free.

Yes, now more than ever.

Furies was a member of the United States Marines Corps and was honorably discharged.  I look forward to researching and  and adding  recovery content as it relates to Veterans… Thank you to all who serve and have given part or all of their life for their country.  Semper Fidelis